She was a virgin. In spite of endless wishful thinking and plays, novels, and movies to the contrary, there’s no evidence the Virgin Queen was anything but.  Had she not been what she publically claimed to be and based her image on, she would have had her power and authority and veracity stripped from her in an instant.

She was the last English monarch to be purely English. She was followed by the Scottish Stuarts, and then the German Hanoverians, and so on.  Even the present royal family had to change its name from Saxe-Cobur-Gotha to Windsor to sound less German in 1917.

She was a local monarch. She didn’t travel very far from London—she never got  as far north as York  and she never crossed over into Europe.

She didn’t hang out with Shakespeare or attend his plays at the Globe. It’s a lovely scene in “Shakespeare in Love”, but the queen did not attend the public theater.  Instead, the theater came to her.  Plays were presented at court.  She met Shakespeare and reputedly liked the character of Falstaff, but she didn’t pal around with him.

She knew she was getting old. She did keep mirrors in her rooms and wasn’t afraid to look in them.  The official portraits, though, were executed according to approved images.  They were not expected to be true likenesses, any more than the portrait of the present queen on money reflects her exact image.  Although it’s updated from time to time, it’s always younger than she is.

She admired her father and praised him often. Since he executed her mother, and ignored her for most of her life, you would expect her to hate him.  Why she didn’t is another mystery of her psychology.

She never tried to rehabilitate her mother’s reputation. Unlike King James, who quickly ordered his mother Mary Queen of Scots to be taken from her obscure grave in Peterborough and reburied in a magnificent tomb in Westminster Abbey, Elizabeth did nothing to comment, one way or the other, on Anne Boleyn and her innocence or lack of it.  She preferred to let sleeping dogs lie.

Elizabeth had hair. She wasn’t bald and she didn’t shave her head.  Her hair thinned and turned gray, but she still had a head of hair.

Elizabeth wasn’t religious. She seemed to have a spiritual sort of humility but one historian observed that when Elizabeth was most troubled, she turned to the classics rather than to the scriptures for consolation.

Elizabeth was the last Tudor. Not only did she have no children, but there were no surviving collateral cousins, legitimate or illegitimate.  She was truly the end of the line.

Adventures in Research: In the Footsteps of Elizabeth Tudor

Because Elizabeth spent most of her time in the London area, and London has grown into a monster-sized city, much has been swallowed up or changed beyond recognition from her day.

Nonetheless, some of her world lingers on.  The river Thames itself, though embanked, tamed,  and spanned by many bridges rather than only one, remains a constant.  It is still possible to go from Greenwich, through the city of London, past Richmond Palace, and on to Hampton Court, travelling the way Elizabeth did—by boat.  There is no more delightful way to spend a summer day, and it’s a popular excursion.  As in Elizabeth’s time, there are still swans on the Thames.

Here are some highlights of my time in England while researching Elizabeth’s life:

Before she became queen, Princess Elizabeth spent much of her childhood and early adulthood in country houses.  The most famous of these is Hatfield House, about 15 miles outside London.

It was there that Elizabeth learned, in November of 1558, that she had become queen.  Tradition has it that she was seated beneath an oak in the grounds when she received the news.  Today there are still oaks at Hatfield, and I was lucky enough to be there on almost the anniversary of her accession.  The park had a misty and romantic feel to it.

Later she held her very first council meeting in the Great Hall at Hatfield House  where she appointed William Cecil as a councilor. Today the Great Hall is used for banquets and other events.  I attended one; some of the other attendees were dressed in full Elizabethan costume; all I managed was a velvet jacket and cape.

Today, the Cecil family still owns the mansion nearby; see it beyond the maze.

Elizabeth tended to keep the same attendants; loyalty and steadfastness was one of her leading traits.  Her nurse, Blanche

Parry, served her almost all her life, dying in 1590 at the age of 80.  Elizabeth gave her a state funeral and had her buried at St. Margaret’s church (near Westminster Abbey).  She had a lifesized effigy set up over the door that lets us come as close as we ever will to seeing a dear friend of Elizabeth’s.

When Sir Francis Drake was exploring the world, much of what is now everyday to us was exotic to the Elizabethans.  Upon his return from a voyage, he presented Elizabeth with a coconut, which she converted into a memento; the elaborate device can be seen in the Greenwich Maritime Museum.

Westminster Hall, which is part of the old Palace of Westminster and now included in the Houses of Parliament complex, had a long, dramatic history.  As an all-purpose celebration and condemnation chamber, it served as the setting for both coronation banquets and state trials.  Anne Boleyn and Thomas More were condemned here, and during Elizabeth’s reign, the Earl of Essex was tried here.  It is famous for its medieval hammerbeam roof, one of the finest in the land.

Many an event was held in Hampton Court, and it stands today as a favorite site for Tudor fans.  Plays (including ones by Shakespeare) were presented in the Great Hall.

Hampton Court was and is very dramatic approached by water, and today that is still the best way to travel there.

Hampton Court also has a magnificent rose garden. Here you can glimpse the Great Hall rising behind it.

Elizabeth put great stock in her astrologer, Dr. John Dee.  He had recommended the best date for her coronation (January 15, 1559) and certainly her successful reign seemed to bear that out.  So when he told her in December of 1602 that she must leave London and go to Richmond, because death was waiting in London, she obeyed.  But it was in Richmond that she died, 3 months later.  Today there is not much left of Richmond Palace, but the old gateway, through which Elizabeth entered but did not leave alive, still stands. 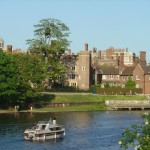 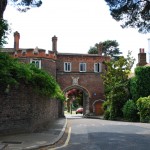 MORE ABOUT THE BOOK