Ebenezer Scrooge has figured large in my life. He was my Man — my idol — for a good while in my formative years. I came by him naturally, and I acquired the nickname “Scrooge” all on my own. I can’t say it was before I’d heard the story, because Scrooge is impossible to escape in our culture. He’s everywhere, from Scrooge McDuck to pizza ads: “Feast like Santa, spend like Scrooge.”

But I was the five-times great niece of “Hard Money” Scott, and his blood surely ran in my veins and his mindset in my brain. “Hard Money” was a trader in South Carolina in the 1700s, who showed up at auctions brandishing cash and vanquishing rivals that needed to pay on credit — and who always demanded payment in ‘hard money on the barrelhead.’ Yes, indeed, Uncle Hard Money was an inspiration: a real-life Scrooge for me to emulate.

I got started on my career early. The Christmas when I was six was probably the best Christmas I ever had, gift-wise. I got not only a train set (little girls weren’t supposed to want one, but I wanted one madly), but a 20” blue bicycle with a speedometer! Never mind that I couldn’t ride a bike yet — I’d learn. Oh, I was so proud of that bike and its nifty speedometer…I came close to idol worship with that bike.

Then — disaster! My dad was a Foreign Service officer, and he was assigned to a Middle Eastern country where I couldn’t ride my bike, so we had to leave it in the States. He promised he’d buy me a new one when we returned, with the money he earned from selling this one now. He reckoned it would fetch $75. The promise was vague, so I made him write out a promissory note — I can still see it in my mind, written in block letters on a page from a yellow legal tablet:

“I, Scott George, agree to pay the bearer seventy-five (75) dollars on demand. Signed, ______” Then followed his signature.

I carefully folded it up and put it in my Scottish plaid purse (how fitting). I kept it for three years and then produced it, holding him to his word. He just shook his head and muttered, “Okay, Miss Scrooge!” He seemed in awe of my filing capabilities and elephant–like memory, as well as my flinty pursuit of a debt. 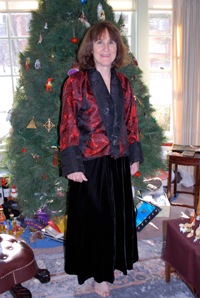 By that time, I had read “A Christmas Carol” and knew the story. I knew I was supposed to dislike Scrooge, but I kept thinking he had a point about a lot of things. And Tiny Tim — that child was so saccharine and schmaltzy. I just couldn’t identify with him or the long-suffering Bob Cratchit. Every Christmas I’d re-read the story, enjoying all the little details that are left out in shorter versions. Really, that story became my Christmas. I even made my parents cook a goose one time, and I wanted to play parlor games, like Scrooge’s nephew, Fred, in the story. (That lasted only one season. The goose was greasy and coated the oven with goose-fat, and parlor games were considered dorky, even back then. Oh well.)

After I grew up and got married and had my own child, it was time for her to be introduced to Scrooge! We started going to the annual production of “A Christmas Carol” at the Children’s Theater, and that became our entrenched family tradition. Every year we’d return, to my husband’s good-natured groaning about it. We knew all the lines by heart: “You wish to be anonymous?” “I wish to be left alone!” “Another idol has displaced me — a golden one.” “I wear the chain I forged in life. I made it, link by link and yard by yard.” “Business! Mankind was my business!”

And then a funny thing happened. What I saw every year in “A Christmas Carol” changed, depending on where I was in life and what my concerns were. It had much to teach me. One year, it made me think of how different Scrooge and I were: If I was old and there wasn’t much time left, I would have sunk into depression once I’d realized that I’d wasted huge amounts of my life, but it didn’t seem to bother Scrooge. Better late than never, he seemed to feel. Was he Zen, just living in the moment?

Another year, it caused me to examine the chain that I was forging. What were the links made of? And how encased was I in them? The cleaning woman, Mrs. Dilber — she was invisible to Scrooge. How many helpful people in my life were invisible to me? She literally took the shirt off his back after he was dead and sold it to a peddler, saying, “He frightened every one away from him when he was alive, to profit us when he was dead! Ha ha ha!” What would people do when I died? A dreary thought, but Christmas is a time of ghosts. Attending “A Christmas Carol” became a yearly examination of my conscience, making me feel like a desert monk.

And, gradually, I began to see that Scrooge was not so cool after all. The man was truly miserable. My idol had not only feet of clay, but they were turning blue from lack of circulation! And Tiny Tim — really, he wasn’t so bad. (Although I do still wonder what exactly was wrong with him.) Bob Cratchit — well, I wonder how many cheery people there are like him, who make the drudgery of offices bearable for their office-mates? Surely the world needs more Bob Cratchits.

Since then, I’ve made the pilgrimage to visit the Holy Grail, a manuscript copy of “A Christmas Carol” in the Morgan Library, to pay homage to that miracle of a book. We’ve attended productions of “A Christmas Carol” in many guises, including a gay Scrooge, a musical Scrooge, and this year, we’re going to the Ford Theater in Washington, D.C. to see it. What will I find in it this time?

But surely the best Christmas present I’ve ever gotten — perhaps topping even the blue bike? — was my husband’s gift of a fully annotated version of “A Christmas Carol.” Being Jewish, Christmas isn’t exactly his holiday, but his knowing what it means to me is what makes his gift so special. And isn’t that one of the story’s messages — to appreciate and celebrate what’s unusual in each person? Now I can delve into minutiae about the story to my heart’s content. And I’m about ready to haul it out again for this season’s stint!

I would sign off with, “God bless us every one,” but I haven’t gone that far yet.

Scroll back to top